I am again linking with Not Afraid of Color for I Like Thursday this week. If you missed my first “I Like” post (Shopping at thrift stores) you can find it here. I had planned to link each Thursday but life got in the way. So I’ll leave it as I’ll link as often as I can.

This post may not be surprising to some of you since I live in Arizona in the winter.

This pic was taken in the Desert Botanical Gardens in Phoenix when Chihuly had his exhibition there. I like Chihuly too but that could be the subject of another post.

I like — I mean I really like —  Saguaros. From the first time I saw a Saguaro (pronounced sah-wah-roh), I was enamored by the way they looked: tall and stately, standing silently, just waiting for something to happen,  just don’t touch since they do have sharp spines, after all. 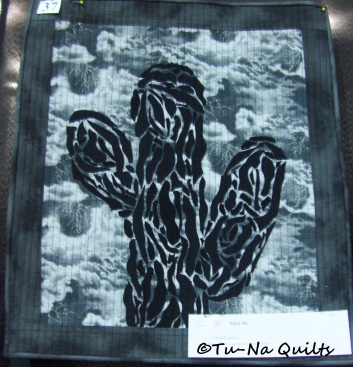 These two were at the Tucson Quilt Festival that I attended last week. Post coming soon.

I even like Saguaros on quilts. These two were at the Tucson Quilt Festival that I attended on Feb. 17th, 2017.

The Park is divided into two sections. We prefer the West side as it has more Saguaros. And look, there’s even an outline of a Saguaro. Maybe I like them because this is how they look when I draw them.

The movie at the Saguaro National Park Visitor Center near Tucson says that Saguaros look like people ready to march over the hills. At dusk, if you squint, you can actually see that might be true.

I’ve seen many Saguaros. It helps to live in this desert. Phoenix is in the upper part of the Sonoran desert—the wettest desert on earth which gets between 7-10 inches of rainfall each year. Saguaros are only found in the Sonoran desert. Similar looking cactuses (called Cardon) are found in Baja CA, upper Mexico, and a few have been transplanted in the Desert Botanical Gardens in Phoenix. Although they look similar to the Saguaro, they grow much larger.

Sometimes they seem to grow out of the rocks. Their root structure is very shallow with most roots only 3 inches below the surface and one large tap root that goes 1-5 feet down (depending on what source you read).

Saguaros grow slowly. In the desert, it may take 10 years for them to reach an initial height of one inch. If they are lucky and don’t get eaten or trampled, they can reach 45-50 feet tall in their 150-200 year lifespan.

They start forming arms when they are between 50-100 years old. Some don’t get arms at all and some get many. I’ve seen some with arms on arms. You can’t tell the age of a Saguaro by counting its rings like a tree or by the number of arms they have. 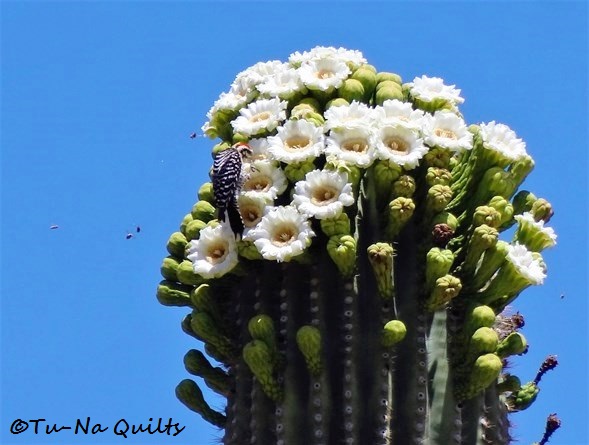 A Saguaro starts to produce blossoms once it reaches 35 years of age. Each blossom, which opens at night and begins to wither around midday, lasts for only one day. Usually they bloom in late May or early June around here. Last spring they bloomed early and we were able to see the desert ablaze with color before we left for home up north. This one is particularly full of blossoms. The Saguaro blossom is Arizona’s state flower.

The Saguaro has internal ribs made of wood. They can weigh several tons (an adult one can weigh up to 8 tons) after a good rainstorm depending on the source you read. Contrary to what you’ve seen in western movies, you can not save yourself in the desert by eating one to get water. 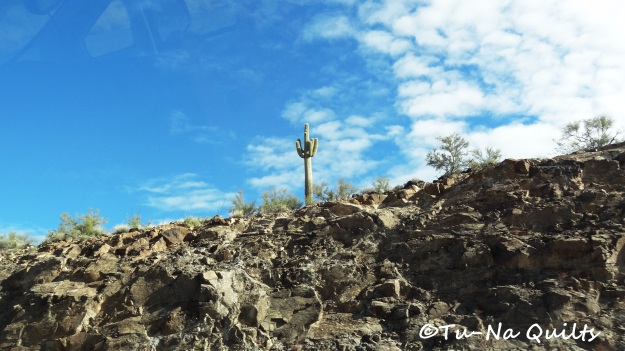 Look at that beautiful sky!

I see Saguaros in yards around my Arizona home and along highways. But my favorite place to see them is out in the wild or in the National Park. I hope you get a chance to see some too.

I posted this pic on Dec. 23, 2016 as part of my “I Want to Wish You a Merry Christmas-Arizona Style” series. I posted pics for almost 2 weeks of some really unusual and interesting ways people decorate their yards and cactuses for Christmas. The pics are still here on the blog (if you missed seeing them, go to Archives on the side bar and click on December).

Some of the residents of my village decorate their Saguaros for Christmas. Some Saguaros seem to develop their own decorations.

This crested Saguaro was transplanted just outside the entrance to the Desert Museum near Tucson, AZ. See the next pic for a close-up of it.

These crested Saguaros are quite rare. Sources list their ratio as 1 in 200,000. I’ve seen two in captivity: one at the Desert Botanical Gardens in Phoenix and one at the Desert Museum near Tucson, and three in the wild: one on the Desert Belle Boat trip around Saguaro Lake, one just outside the Visitor Center at Saguaro National Park, and one took us by complete surprise as we walked along a trail in Colossal Cave Mountain Park near Tucson. 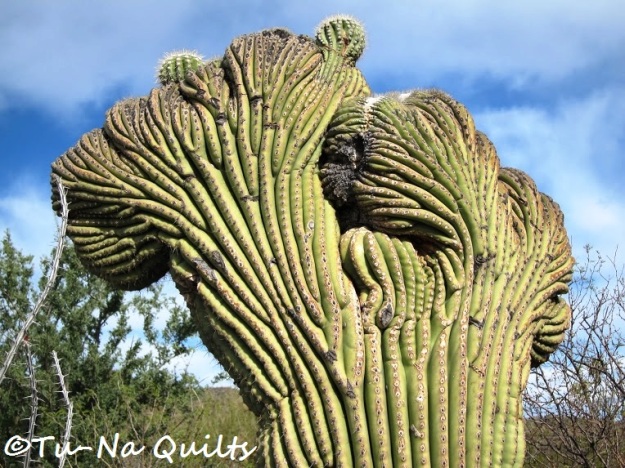 There’s really no definite explanation for why this happens. There’s some speculation that it’s a genetic mutation or from damage caused by insects, bacteria, fungus, frost, or lightning. No matter what the cause, they are an unusual sight to see. This one is sprouting two arms on the top which are new since the last time I saw it. 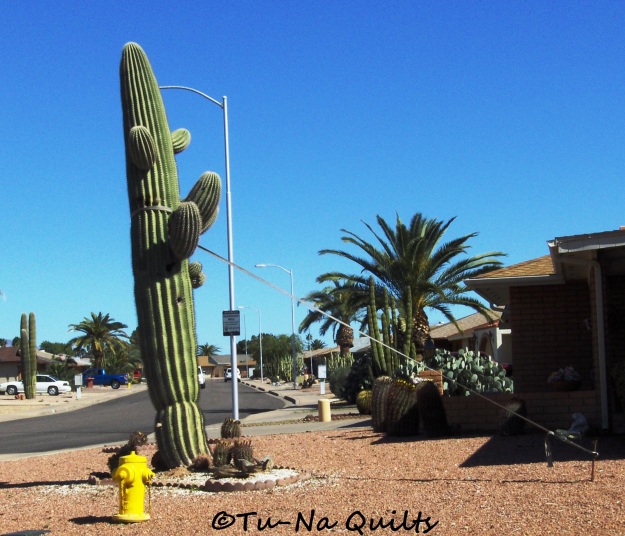 I am afraid this cactus in my village may not last much longer. It’s being held up by the support rope. We’ve seen many Saguaros in yards trying to be saved but they usually end up being taken down.

What I Learned Today:

Question: Have you ever been to a desert or would you like to?

Thanks for stopping by and do come again.

Linking to Can I Get a Whoop Whoop? at Confessions of a Fabric Addict.

15 thoughts on “Tu-Na Travels: I Like The Saguaro Cactus”

I'm intersted in what you think. Thanks for leaving a comment. Cancel reply

This site uses Akismet to reduce spam. Learn how your comment data is processed.

Welcome to Tu-Na’s journey. My name is Karen. I am glad you stopped by.

Tu-Na (Too-Nuh) noun, 1. Title bestowed upon me by grandson. 2. Combination of Tutu and Nana. 3. Not having to do with a fish or fishing (unless it's cooked or quilted). Origin: See full explanation in Profile or About Me.

Find these patterns at Tu-Na’s Pattern Shop on Payhip. Click on the pictures below. 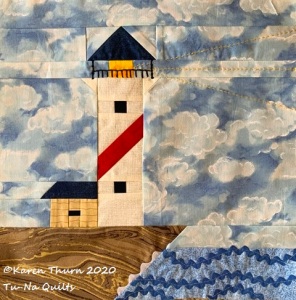